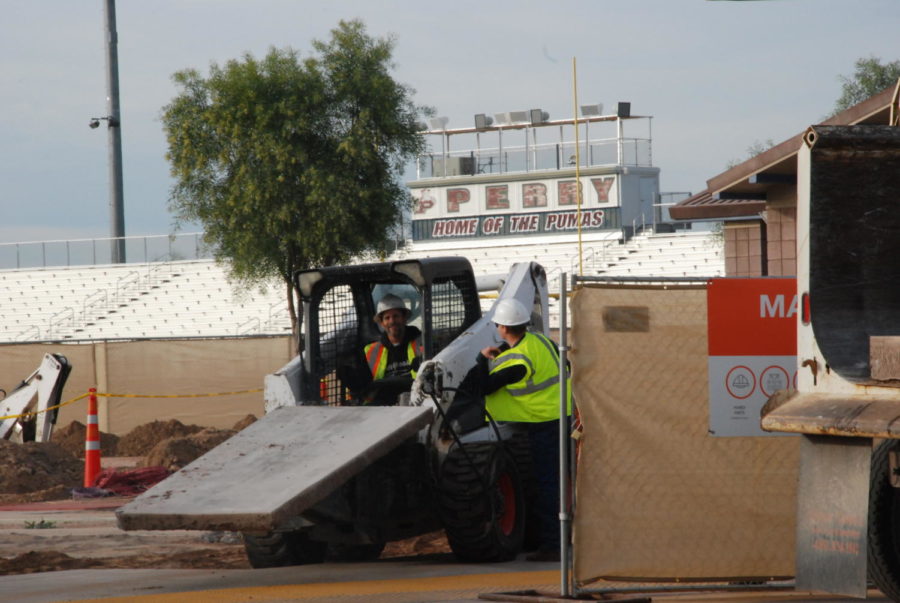 Eight tennis courts are in the process of being demolished for the purpose of bubbles that surfaced throughout the court, in which could not be solved any other way. These bubbles are an unknown chemical reaction in the concrete that has left officials unaware of a true cause. In order to return the tennis courts back to their prime and glory, the only process to undergo was totally demolishing them.

“[The tennis court] looked like concrete that was a hundred years old,” principal Dan Serrano says. It was time to fully demolish and replace the courts by starting over. Construction vehicles began working diligently on end to complete these courts. Along with the tennis courts, a new building with twenty-four classrooms is being constructed, a new locker room, and a relocation of track obstacles.

“We have the most student athletes in the district, and you do not want to know how many students do not have a locker,” Serrano stresses.

The student athlete population on campus takes up majority of the campus. Unless one took online physical education, they took it at campus, in which they had a locker. Because so many students need a locker at the same time, many have to share the tiny space provided to them with someone else. Starting next school year, new additional lockers will be in use by male athletes throughout campus.

With the student population growing each year, new additions to the school have been put to work in order to provide all students an equal opportunity to achieve in academics and sports.

The start of November was when construction of the new C-building broke ground. Currently, heavy machinery works endlessly on the building every day. The demolishing of the courts was done by excavators and compact track loaders, or, in other words, very large construction vehicles.

The track field is also undergoing a change in its location. The track jump course is going to be relocated to the pole jump area across the field.

All these improvements throughout the school are benefiting the student athletes in safety and a reliable learning space.

For the school and district, the new C-building is the number one priority to be complete. Enabling our expanding population to have more classrooms and organization within their classes is essential for students. Not only do students benefit from these new additions, but teachers do as well. Traveling teachers will now have their personal room, along with a less crowded class size.

Following the building, the tennis courts are second priority, and the locker room is the third, yet important priority.

The Precedent • Copyright 2020 • FLEX WordPress Theme by SNO • Log in