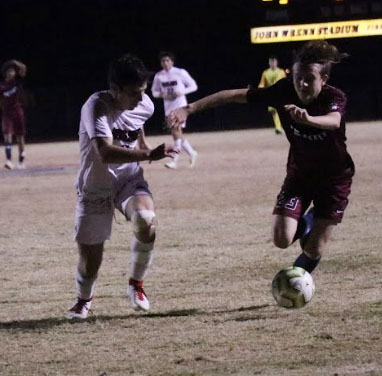 The Pumas went into the new season with confidence after varsity won both scrimmages against the freshman and JV team. New players are thought to have a good impact for the team, no surprise to head coach Jason Berg.“I kinda knew most of them going in but they are definitely stepping up more than I thought they would which is great and I certainly think overall as a group we got better but not too many surprises,” Berg stated. Some of varsities returning underclassmen are Cole Wood, Sean Flynn and Landon Carter. The younger players get their inspiration from the players who have been there long before them. “I look up to all the seniors because they’ve been here the longest so they know the most and kinda teach everyone else kinda how to go about things,” Woods stated.
The team went into their first game against Red Mountain hoping to come out with a win, yet with all their efforts they still fell short. The main issue was the teams lack of momentum.
After the unfortunate first game loss the Pumas are not going to let this stop them from continuing to improve throughout the season. The Pumas will be utilizing their strengths and improving on some of their weaknesses to hopefully get a better result in upcoming games. “We possess the ball really well we moved the ball from side to side,” Berg said. The Pumas want to see good results and they will continue to work to get those results.
No matter the result the team captains have hopes for how the Pumas season will be going this year. “I want to lead us to the state championship, we have the talent to do it and I feel like we can win it so that’s what imma try to do,” senior captain Kyle Brereton exclaimed .
The boys are hoping to come out on top as they go into their next game against Mountain Ridge on Jan. 8th.