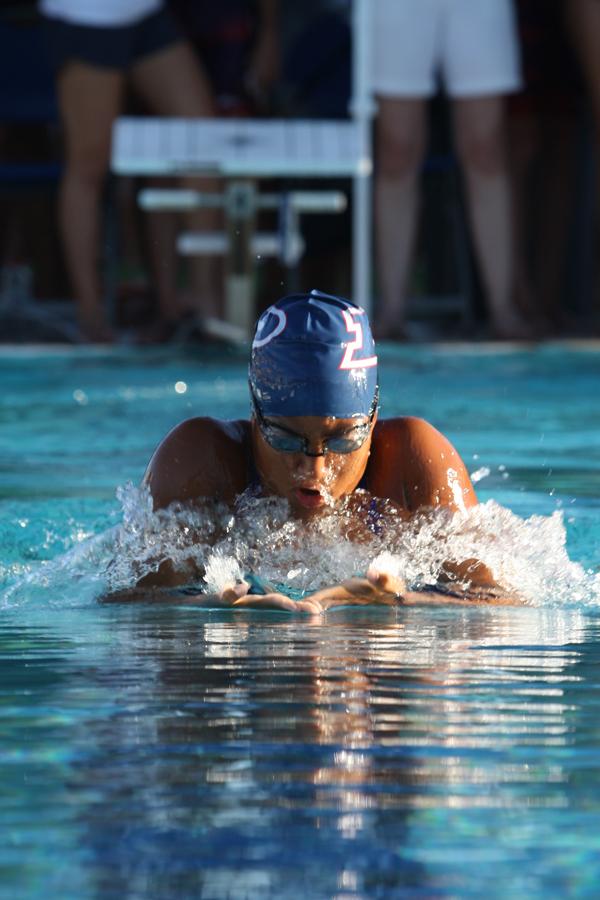 Senior Raevin Richardson competes in the breaststroke at the state swim meet. Richardson placed second in state in the race.

On Friday Nov. 7, the Perry Swim and Dive began their annual state meet. On Nov. 8, it was wrapped up, ending the Perry swim and dive season. The results? Nothing short of triumph.

Their coach, Stephanie Carrasco, is very pleased with their performance. “We scored in state, had people placing in state had best times in state and I couldn’t have asked for more.” Carrasco says.

Up until state, the girls team went 7-1.  With superb performances by senior Raevin Richardson, senior Ryleigh Weight, and freshman Morgan Corey, the girls team ended up finishing 12th in state. “On the girl’s side Raevin Richardson was a placer individually.” Carrasco states. Corey was one of the only freshman to make the qualifying times for the state meet on Nov. 7 and 8.

“I thought it went really good,” Corey said. “We [the girl’s team] only lost one meet, and that was really good.” She says. Corey’s best meet was against Campo Verde High School, an early meet in the season.  “I raced really well,” Corey states about her performances

Junior Jake Perrine, and senior Jon Underwood all had key races that helped lead the boys swim team to a 13th in e finish. “I think it was a really good season so far, this is the best our men’s team has ever been,” Underwood stated. The boy’s team broke six school records this season alone with Underwood’s help.

Both teams improved substantially as last season the girls team finished 25th in state and will end this season as No. 12. The boys team began this season as the 18th school in the state and finished at No. 13  in state.

Perry swim has had a season with both teams climbing higher in the state rankings, making memories and winning races. Though this is her first season as a Puma, Corey knows this season will be one to remember. “We had a lot of fun, and made a lot of memories.” She says.

Along with their coach, the rest of the swim team is looking forward to next season, ready to be even more successful in state, set even more records, and race even faster. “We need to get some more year round swimmers so we can compete at the higher level and be more successful at state and place higher at state.” Carrasco says.

The future for Perry Swim could not be brighter as the returning swimmers leave the pool, ready for next season.