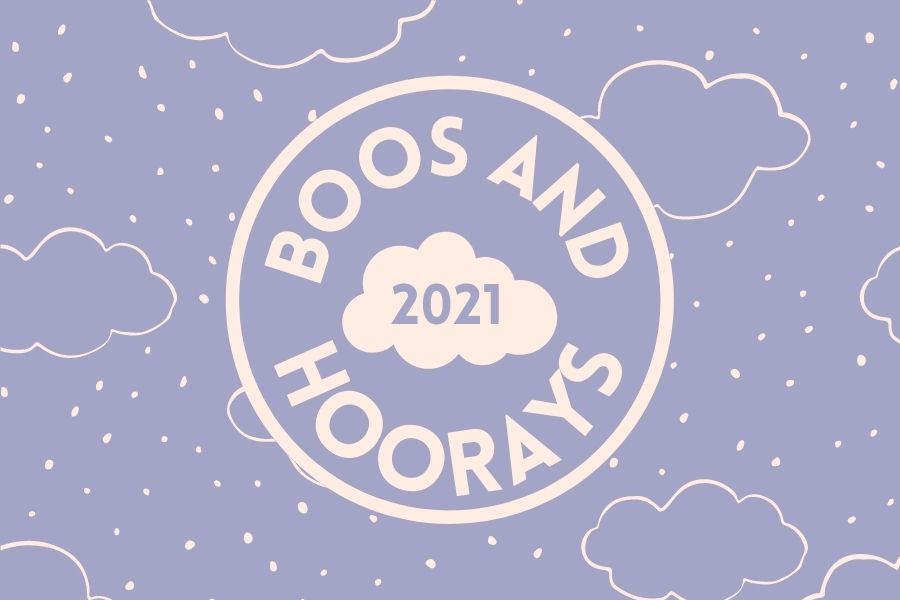 "Boos and Hoorays" are an end-of-the-semester Precedent tradition. This semester's wrap up includes mask fashion, cancelled proms, and in-person graduation.

As per tradition, the staff of the Precedent reflected on the 2020-2021 school year to create a list of the top memories and lowest moments both on campus and within the community. To conclude this May issue, we present to you our final list of “Boos and Hoorays.”

Boo: Seniors official prom got cancelled this year, so the class of 2021 did not get a prom for both junior and senior year, which is a token part of the high school experience.

Hooray: We get an in-person graduation! Seniors this year will be able to have the traditional experience of walking across the stage to receive their diploma, which is one of the most awaited events.

Boo: Sports teams did not get their full seasons and chances at state titles were cut short.

Boo: The first quarter of the school year was spent doing distance learning. This was a challenge for many students, and made the high school adjustment more difficult for freshmen.

Hooray: AP tests this year were offered in the traditional in-person method this year. This renewed the original 3 hour test and made it easier for students to demonstrate a more wide ranging view of what they learned this year.

Boo: Graduation is not at ASU like it has been in previous years, instead it is being thrown at Perry at the John Wrenn Stadium. This will be a much different experience and more crowded, and can be argued that it isn’t the same experience.

Boo: There were less field trips, which are a fun aspect of application learning.

Hooray: Badminton won their fourth championship in a row, keeping their winning streak of 4 seasons.

Boo: The school’s communal computers went through excess use in a year of technological assignments, and it shows. The COW’S are often unbearably slow and take an obscene period of time to load. The computers are also quite loud, with noise fans to counteract the constant overheating that is also a product of the out-of-date laptops. While it’s understandable that the expenses to replenish the computers is out of budget, one can hope that next year fundraisers and budgeting can provide students with laptops that are more accessible and allow more learning to happen.

Hooray: While the wearing of masks was greatly disliked by some, the usage of masks can provide convenience in many aspects. Flus and other seasonal illnesses decreased greatly by the wearing of masks. Also, wearing a mask allowed a facial blemish to be concealed, and created a more lax morning routine for a face that is to be covered all day. Masks could correspond with one’s outfit and proved to be another aspect of creative freedom and expression.

Boo: The Band programs had less opportunities to showcase what they have been working on throughout the year. Concert and Symphonic Bands had a reduced number of performances, whereas the entirety of the marching band season was canceled.

Hooray: Several Perry sports teams, for those whose seasons were not canceled, have been successful during this school year. For example, the tennis teams made it to the quarter finals. The athletes have been able to improve their playing capabilities and overall grow together as a team.

Boo: This year everyday was a block day, creating very long classes for students and teachers. Each class was over two hours causing students to lose focus quickly especially towards the end of classes making it harder to get work done. And it was also tiring on teachers who had to figure out what to teach and keep students productive and focused for two hours.

Hooray: Perry’s boys volleyball team has had an undefeated season. They are also number one in the nation for boys volleyball. Currently they are playing the state tournament, and if they win they will be the first boys team to win a championship in Perry history.

Boo: Conference has no longer been available during the school day. This reduces the amount of social interaction between students to express their common interests through clubs.

Hooray: School cafeteria gave out either a free lunch or breakfast to students this year. Having this opportunity, it ensures that students get fed and do not have to worry about the funds for lunch during a global pandemic.

Boo: The printing press closed this year so the newspaper is unable to do a print newspaper. However, all issues of the Precedent are available online.

Hooray: Even though prom was cancelled, seniors still had a ditch day.

Boo: Movie theaters are closed forever it seems and that’s really awful because the movie experience is made much more powerful by the act of having to physically enter the theatre. The lack of physical movie theatres being open has made the movie experience significantly worse because watching a movie at home is just not the same.

Boo: Taking an honors language class online and not being able to attend the google meets because in-person class was at the same time? Not the easiest thing. My GPA is definitely dropping because of a language class which is not the most fun.

Hooray: When I wasn’t at school or doing homework, I was dancing. Every chance I got, I spent dancing. Dance is my outlet and getting time to express myself while also improving myself was priceless. It also really paid off which was completely unexpected but I am so grateful for it.

Boo: The next season for Outer Banks on Netflix has not come out yet. I have never binge watched a show as fast as I did that one.

Hooray: I have made more friends this year and gone on more vacations or trips than I ever have. Being in a pandemic was horrible in the beginning and then I changed how my life would be.

Boo: After six months of being able to sleep and eat  whenever I pleased, transitioning and having to sit in a classroom for 7 hours a day really made me miss the freedom of no school. This massive change up gave me major senioritis and I am only a Junior.

Hooray: Sleeping and eating has never had such a great appeal to the human soul. After the endless pantry hours and the mounds of stockpiled food, laying on the couch and munching on potato chips will forever hold a special place in my heart.

Hooray: I am, however, beyond grateful for the opportunity to write for the newspaper, The Precedent. The newspaper helped me explore a hobby of mine, writing, in a new way I had never done before. I was able to share my work with others online, and I made many new friends and met so many nice people. While it was challenging and sometimes stressful, I am extremely happy with my experience this year!