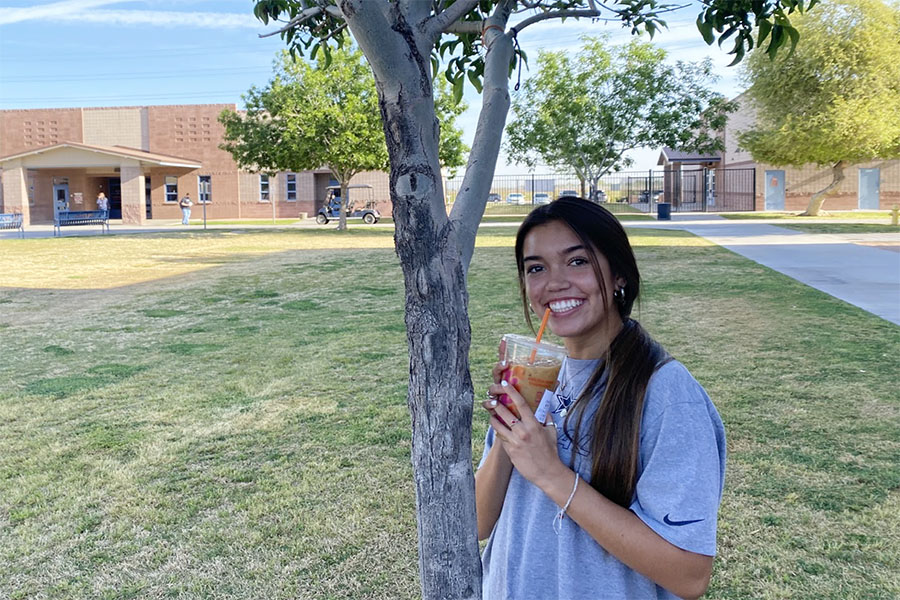 As time progresses through each new year, businesses shift their menu to have seasonal appeals and flavors. 2017 introduced many new items to a vast variety of restaurants. Many companies incorporated a trendy item or title into their product’s name.

The most well-known of these seasonal items is the Shamrock Shake from McDonald’s. This treat comes every year around Saint Patrick’s Day and it consists of a prominent mint flavor. This year, they introduced a variation of the Shamrock Shake which allowed buyers to have a Shamrock Shake flavored Oreo McFlurry. The McFlurry came into the rotation last year as a celebration of their 50th anniversary. On top of the Shamrock Shake, McDonald’s also offers a McRib sandwich which has not been a permanent item on their menu since 2012. The McRib pops up at different locations all the time and is advertised by word of mouth. Fans have even created a McRib locator.

If you are a fan of Charli D’Amelio it is nice to be able to order the drink that she always orders. Dunkin’ Donuts offers a drink named “The Charli”, it is known nation-wide as a cold brew coffee with caramel swirls and whole milk. This Tik Tok star’s rise to fame created this drink last year in 2020. This cold coffee means that it can be enjoyed in the summertime as well as the dry Arizona winters.

Another common seasonal item is the Pumpkin Spice Latte from Starbucks, which attracts a lot of craze amongst teenagers. This drink is around Halloween and Thanksgiving. Starbucks sells about 20 million of these drinks every year. The Pumpkin Spice Latte is the most popular of Starbucks seasonal items. Another seasonal drink from Starbucks is the Unicorn Frappuccino. This however was short-lived and has not made a return since 2017.

Chick-Fil-A has a couple of milkshake flavors that appear every so often as well. In the summertime, they start selling millions of peach shakes all across the United States. Being the number one favorite fast food restaurant for six years straight this place attracts a lot of attention. The suffocating heat in the summertime leads to the craving for a cold, refreshing drink. In the winter months, they also offer a peppermint shake which has many mixed emotions clinging to its name. The shake is a mint flavor with chunks of peppermint in it which eventually get soft to be able to drink.

The seasonal appeal to these items is what makes them special and attractive. However, this should not mean that they are exclusively sold during those times. For example, many people buy the McRib in massive quantities since it goes away, but with a spread out more consistent buying pattern, it allows for happier customers. In terms of the milkshakes and other cold beverages, they naturally make more sales in the summer than if it were winter. Seasonal items should not be limited to their once-a-year status.