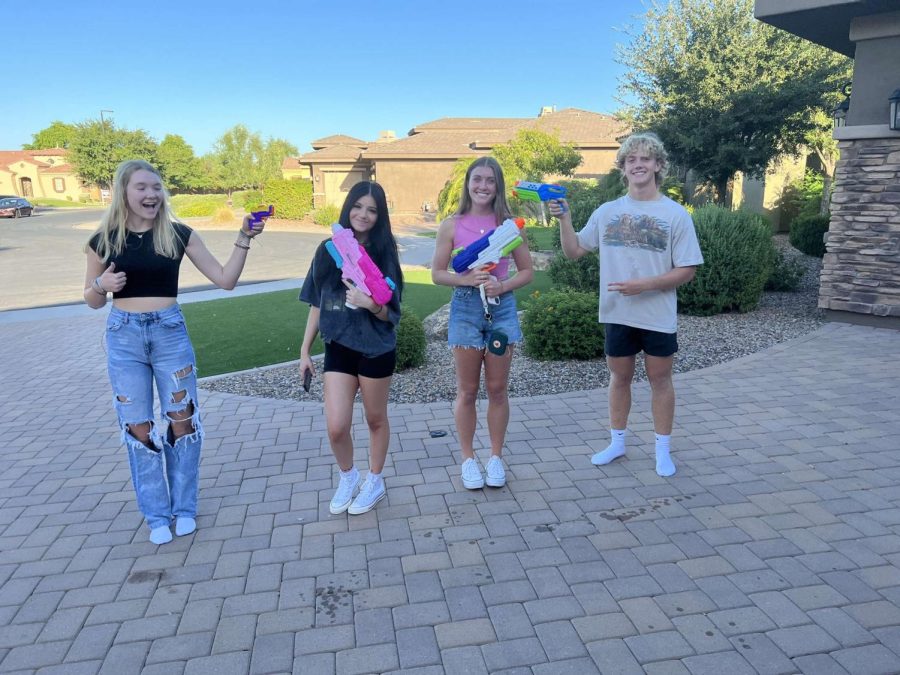 Patrick Duffy and team members eliminate their opponent in the previous round.

Senior year is the start of a number of new traditions for many seniors, with many being a rite of passage for seniors. Assassins has been a tradition across several different school districts. Seniors partner up to eliminate another team. Using water guns, each team must take out their opposing team before the end of the week on Sunday at 10 a.m. Safe zones include the school itself, the parking lot, church events, and sports games. Students are also safe when wearing an inflatable floatie on Mondays, Wednesdays, and Fridays. Students’ biggest fear is the Purge in which anyone can get out any player from any team until midnight. The goal is to track down the whereabouts of the opposing team. Whether outside of work, hanging out with friends, or getting home from school, no player is safe. Players have constant anxiety, wondering who could be waiting outside their door. People are bribing each other, selling out friends, and losing friendships over this game.

Though this may seem childish, seniors take this game very seriously. There is money at stake. Each player has to pay $10 to participate, creating a grand prize for the winners of the game – $3,128. This simple game has turned out to be a test of loyalty, commitment, and determination. Many teams fail the first round, but many do continue on to the next with more grit to reach the grand prize. However, some students have chosen not to participate in this school tradition.

Many seniors who are in multiple honors or AP classes have had an increase in workload this year with college applications. Playing assassins is like “paying $10 for a year full of anxiety,” said senior Paige Newton. The game is intended to last the whole school year as student teams only get eliminated once a week. Considering the size of the senior class, many believed the game had many weeks to come. However, the end of the first round resulted in only 46 teams despite the fact that the game began with 93.

Conducting this game in the beginning of the school year has presented incredible amounts of stress on students. Senior Russell Mullenaux states, “the cost to play the game is just not worth it.” This game presents many challenges that add onto a senior’s little time and money.

Although the beginning of the year is stressful for all seniors, many AP students face additional pressures. Constantly worrying about where their opponent could be, finding addresses of random students, and being sprayed with water guns are a few of the worries that students have to battle. Senior Dayne Christenson, one of many seniors who are not participating in this year of assassins, claims “I just don’t have enough time to play in a game like this.” Christenson swims competitively and has a tougher workload this year than previous.

The stress of participating in assassins is having students “stalk their opponent” said senior Reese Carpenter. Students are paying off others in order to expose their competitors’ schedule, work schedule, home address, or even family events. Assassins is a “invasive sport more than a harmless game” Carpenter explained. Students who participate in this game from other schools have had to go to the hospital from the trauma that this game brings.

This game has brought more than just drama to the table. Once a team finds out who their competitor is, it becomes their whole life; knowing where they are at all times is a priority. Thus, many students have taken this component of the game too far and have created unneeded conflict between students and parents.

The game Assassins has built community and tradition in schools, but it is a gamble for seniors. The time and energy that is put into this game creates challenges that are difficult to overcome. However, some students find that the stress is rewarding. They have a chance to earn a money prize, create new friendships, and have important bonding experiences.