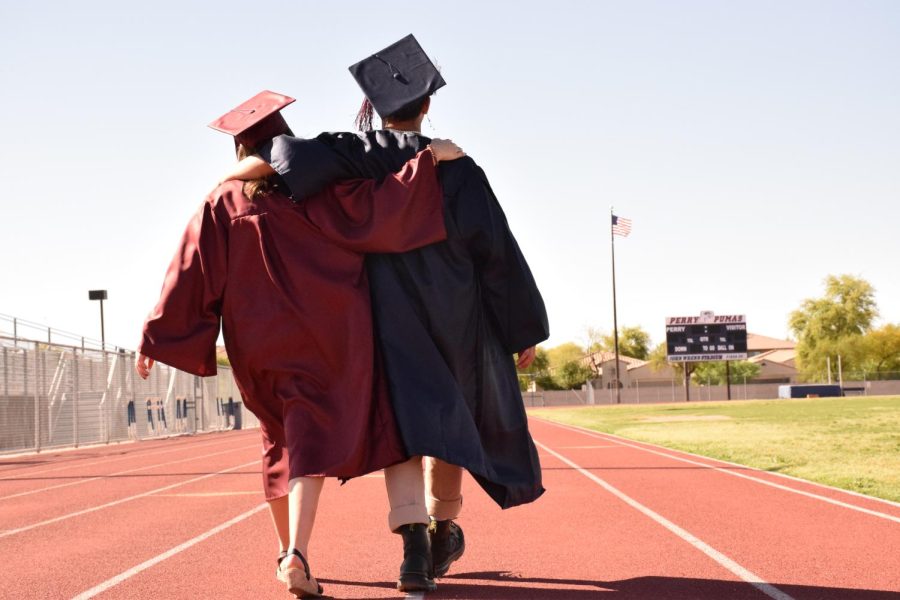 The senior graduation ceremony has been held at our stadium since 2020. The plan was to bring the ceremony back to ASU, however, this year it will stay in Perry once again. The reaction from seniors was overall mixed, with some similarities and some differences in each argument.

Seniors Lilliana Wagner, Annie Morrill, and Isabelle Mitchell all were in agreement that they would prefer it at ASU. “I would rather have it at ASU because the graduations in the past have been there, so it feels more traditional for me. My brother’s was at ASU and he went to Perry, so it was cool to see him there,” said Morrill.

However, Senior Hershel Hall preferred that it stay at Perry. “I would rather have it here because I went here for high school for four years, so I like the sentimental value of it,” said Hall.

Another key factor: space. ASU has lots of it, compared to Perry and the stadium’s tight space. “I feel like it is going to be a little too crowded. The amount of family members in the stands and other friends will take up a lot of room,” said Wagner.

Hall also said the accommodations of having it closer to him and being allowed more family is a big positive. “I have older grandparents, so if I have enough tickets for them to come that would be easier for my whole family, and they don’t have to drive as far,” said Hall.

Vice Principal Kevin Ames touched on the main reason for moving the graduation ceremony. “The primary piece was the additional cost. It was going to be three high schools together graduating at ASU, for all three of us. It was too significant of a cost to go, so as the principals as well as the district took a look at the numbers and decided it wasn’t feasible,” said Ames.

Overall, the situation for most seniors is that it is not ideal. But this backup plan has been done before for years and has worked, and seniors have an opportunity to experience a night they will not soon forget.