Making most of school spirit with small Hype Squad 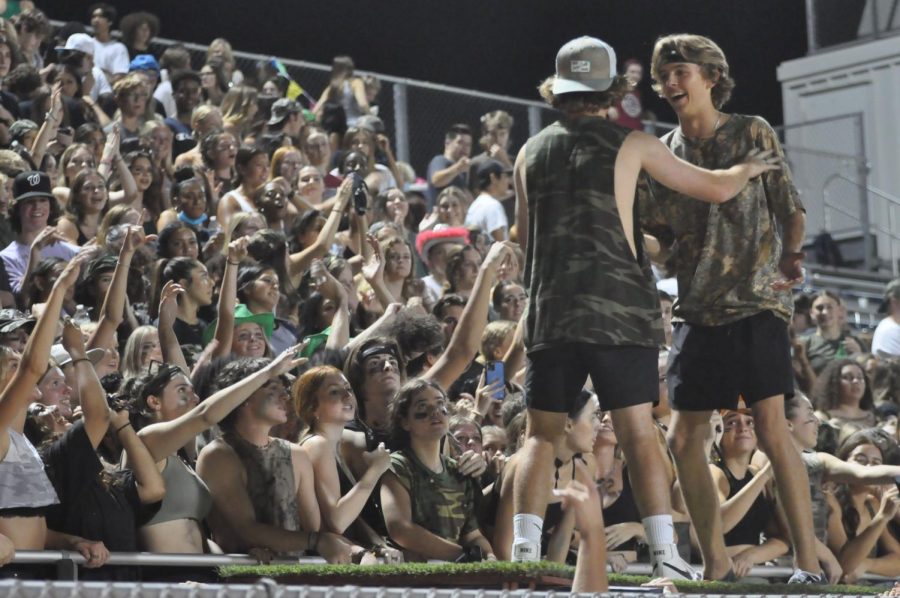 Seniors Cort Cooley and Preston Felker dance on top of the "push-up" board during a football game. The home game against Basha was camouflage themed.

After allowing limited spectators to attend sporting events last year, students have returned full force to football games. The first football game of the year versus Desert Vista beckoned a loud student section to cheer on their pumas. The students took the USA theme for the first football game seriously, coming decked out in all their red, white, and blue.

At the start of the school year, rumors started circulating campus saying that the Administration had vetoed any USA-related themes on campus: meaning no USA themes at sporting events or playing Party in the USA at school dances. However, Principal Heather Patterson has confirmed that these rumors are just that: rumors.

In the past, the Hype Squad was run and made up of big groups of students. Hype Squad was traditionally in charge of coming up with the themes for the football, girls volleyball, and basketball games. However, this year Hype Squad leadership is made up of one person: senior Jake Griffin.

After the commotion and restrictions from last year, the actual Hype Squad is limited in their actual membership. “There’s not really an official Hype Squad group. We just have a big group chat for organization, but I just run the Twitter account,” said Griffin.

Because Hype Squad is one person, the school spirit is currently sticking to football games. “They’re doing a good job for football, but I feel like other sports need hype as well, just because other sports don’t get as much recognition,” said senior Lindsey Engle. But part of the downside to a small Hype Squad is that they have less resources and people to recognize as many sports as they have in the past.  “We usually do volleyball, but I work. Fridays are mostly the days that I have off,” said Griffin.

Although the Hype Squad does not organize the themes for other sports, the teams are still allowed to present their own spirit themes. Which is exactly what the girls’ volleyball team did. Once a team decides on their themes for the season, they present the themes to Jennifer Burks, the Athletics Director, or Patterson. “Ultimately, all the themes come here, just so I can get eyes on them, and so I can see what is going on. I wouldn’t say I have veto power, but I do look to see that I’m in the know of what’s going on and that everything is on the up-and-up. Anything to increase school spirit with student engagement, we’re for. We’re totally for,” said Patterson.

The students will go all out when it comes to the themes on Friday nights. “I love Hype Squad. I love how they are going all out on football games,” said Engle. The school spirit is obvious after attending just one game. “I’m just trying to get the student section going,” said Griffin.

The themes for the rest of the football season are as follows: