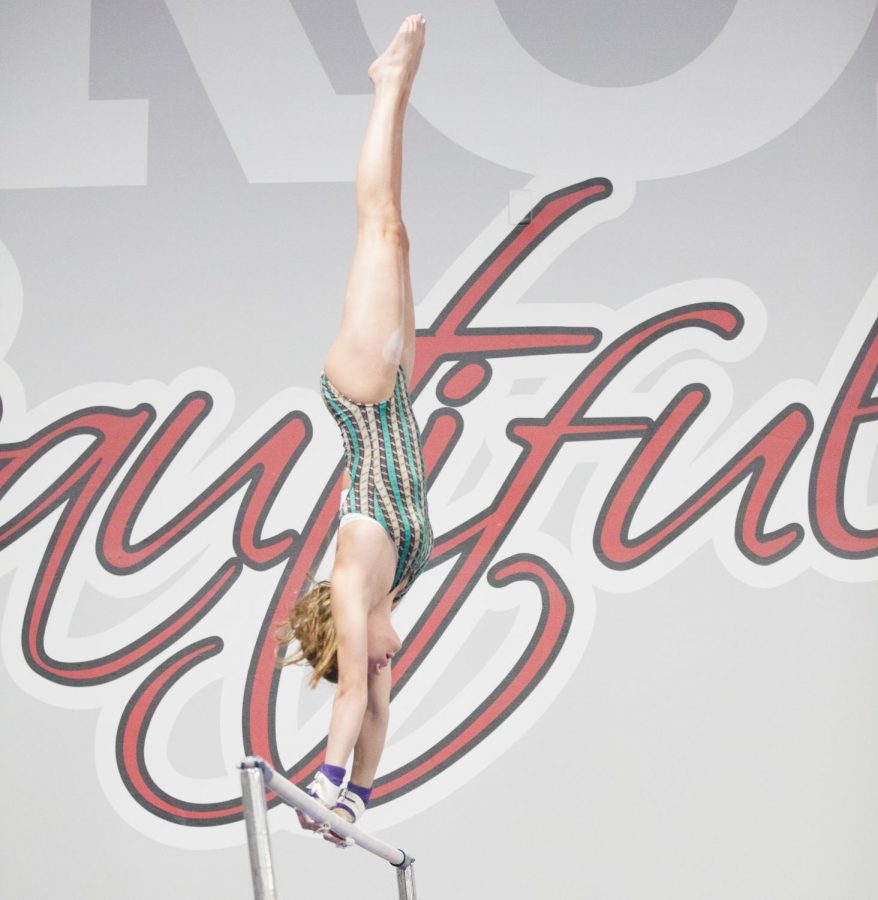 Junior Ava Jorgensen hits a handstand directly on top of the bar in her uneven bar routine. Jorgensen has been a level 10 since 2018 which is the highest level of the Developmental, previously known as Junior Olympic, Program.

Over summer, junior Ava Jorgensen verbally committed to Brigham Young University on a full-ride athletic scholarship. Jorgensen has been a gymnast for 12 years, and despite all the struggles she has faced in and outside of the sport, she never gave up, and was eventually rewarded with this scholarship.

Jorgensen’s skills were first showcased to the BYU coaches at a gymnastics camp hosted by them in June, where recruiters saw and approached her about a scholarship. After phone calls with the coaches and discussing with her parents and current coaches, she knew what she wanted to do.

“It is very cool to be committed to BYU and it is relieving that all my hard work has paid off”, said Jorgensen.

Training as a competitive athlete comes with a lot of stress that she faces on a regular basis. It can be super challenging having to balance school and gymnastics, especially because of the back-to-back hours she spends at school and practicing in the gym.

“I wanted to quit for a long time because it was really hard and my schedule is always super busy,” said Jorgensen, “at times I feel like I’m overworked.”

But her gymnastics roots dig much deeper than just simply joining because her parents made her, which is one of the reasons she never gave up. Jorgensen followed in the footsteps of her sister who was also a gymnast, and aspired to be just like her.

“The reason I got into gymnastics was because of my sister. She started doing it and then I wanted to be like her so I did it”, said Jorgensen.

Eventually, her sister had to quit for personal reasons, but Jorgensen stuck with it, hoping to make her sister and herself proud. With this scholarship, she did just that. Being awarded for her years of dedication and persistence, no matter how tough it got.

With two competition seasons left before she will leave for college, 2021-22 and 2022-23, Jorgensen is mainly focusing on her performance and how she can reach the goals she has set for this upcoming season with her current gym Gold Medal Gymnastics. Now that she has earned a scholarship, she also spends time thinking about what she could do to feel just as confident going into college competitions as she would the competitions she has been attending her whole life.

“One of my goals I have set for myself before I graduate high school is to win an event at nationals or all-around”, said Jorgensen.

Gymnastics helped Jorgensen become the person she is today and receive the opportunities she has. With this scholarship, she gets to continue pursuing her passion for gymnastics while furthering her education and possibly pursuing another career she is passionate about. Jorgensen is currently a junior and will attend BYU in the fall of 2023.