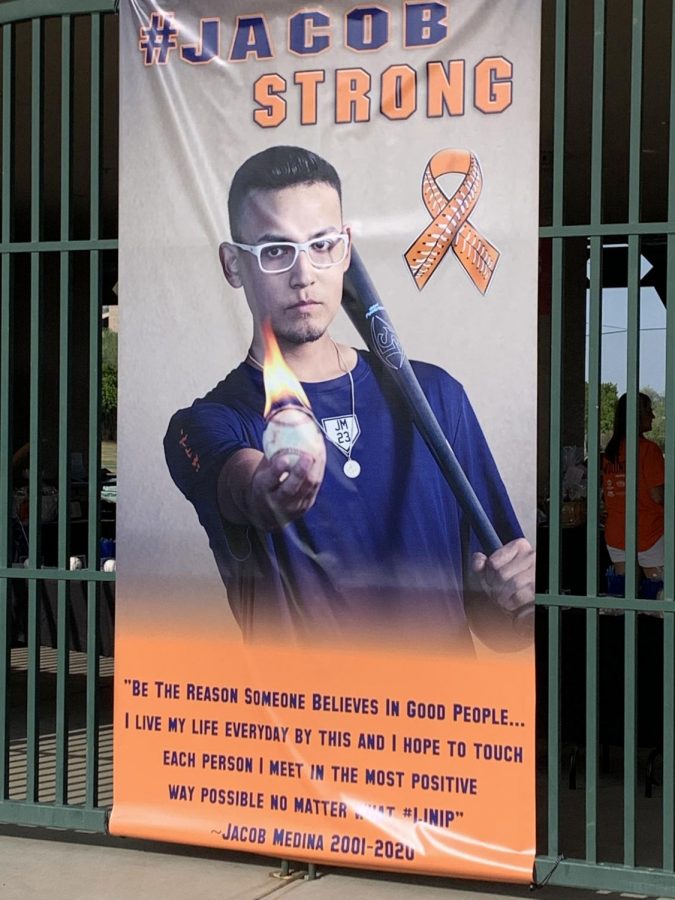 The JM23 baseball tournament was dreamt up by Perry baseball players Jacob Medina and Emery Miller last spring. Medina and Miller envisioned a five day long first annual tournament in which the proceeds could be given back to the community through a charity organization.

The boys’ vision came into fruition last month with a bittersweet twist: the tournament was held in honor of Medina, who passed away after a hard fought battle with Leukemia in May.

From Sept. 15-19, 24 teams from Arizona and Nevada joined together at the Tempe Diablo stadium. Varsity coach Damien Tippett stated that the tournament was “probably the most Perry-focused event in recent memory.”

Medina’s family, teammates, and friends were present, and the money from this year’s tournament went back to the Medina family to help pay for remaining medical costs. Kystal Medina, Jacob’s mother, described the moving gift as “overwhelming but amazing.” An additional tribute included a black bat given to the Medina family by nurse Mariah Meredith, who had come alongside Medina during his battle with cancer.

The atmosphere throughout the tournament was nothing short of powerful.

Senior athlete Carter Richey explained that “the atmosphere and purpose of the tournament were great.” He elaborated, saying that the team was thankful for an opportunity to “get out there and play for [Medina].”

The final culminating game of the tournament was won by Las Vegas Basic over Santan Valley Poston Butte, and the score was 2-1.

Emery Miller, who also started the Emery Bear drive at Perry, is already thinking about next year’s tournament. In an interview with AZCentral, Miller reported that “Every single coach absolutely loved it.” “We’re already saying, ‘Do we expand? Do we look at other fields’?”

Medina’s father, Mike Medina explained to AZCentral’s Richard Obert: “For us, for Jacob, and for future families to come, we hope to do this for a long time.”

It has been decided that the annual tournament will continue to be held in honor of Medina, and that the proceeds will always go back to families in need of assistance covering medical funds.

Richey summed up the spirit of the tournament with a simple sentiment: “[The teams got to] honor an awesome person that had a significant impact on a lot of people’s lives.”