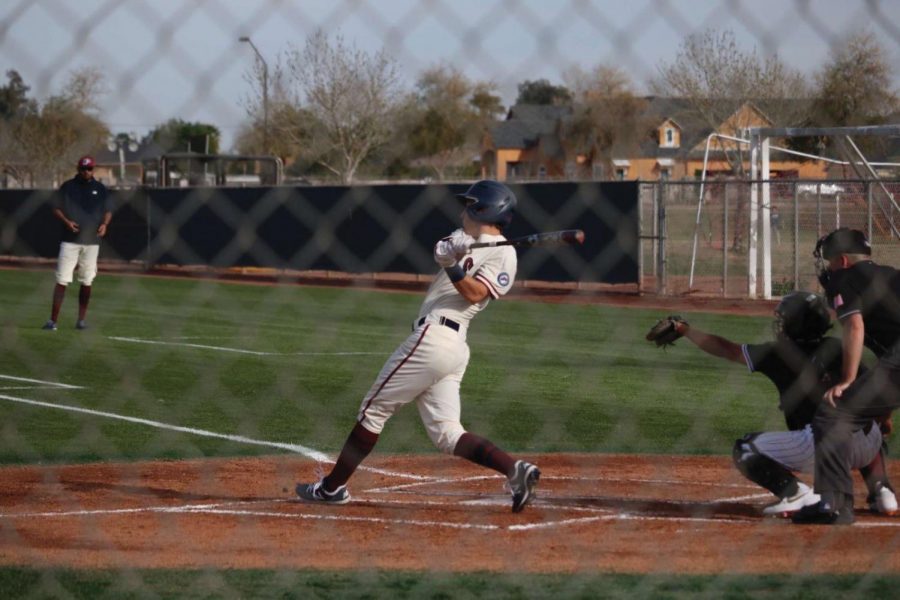 Senior Trenton Pallas at bat during game against Skyline

Trenton Pallas is a three-year varsity starter. To help his team when it has dealt with injuries, he has filled positions and moved from the infield to the outfield, back to the infield and now in 2020, back to right field once more.

“He is willing to do anything for the team,” said head coach Damien Tippett. “He shifted from his natural infield to outfield and moved around without a complaint. He’s a role model for the team.”

Pallas moved to first base his junior year to fill the position of the injured Adam Parra. He moved with little knowledge of how to play the position and learned it, showing he is willing to do anything for the team. His natural leadership and tenacity show up in his stats as he has a batting percentage hitting a .313 and 22 RBIs over his high school career.

He is always there to help his fellow teammates and is constantly working hard. Pallas drives his teammates to work tougher and fills the role of a natural leader on the team.

“He works hard and drives others on drills, he pushes me to get better, and he’s a leader to the team,” senior Brycen Tambone said. Pallas is a hard-working force of energy that fuels his fellow players to play better and be upstanding student-athletes.  “He has grown, he’s gotten stronger and faster, he shaved almost half a second of his 60-yard dash,” Tippett said.

“Not only has he gotten physically stronger but also mentally,” Tippett said, “he’s learned to handle failure, and in my opinion, that’s a big deal in the sport.”

Pallas is trusting in the team’s ability to work hard and make a playoff run this year. And feels the team is ready to have a top performing year.“I’m confident in our team’s ability to make a run this year, we are stronger than ever. These last three years have been an unexpected ride, but it was a lot of fun,” Pallas said.

With the team having natural leadership and working hard towards a title, people like Pallas work hard to keep the team afloat and strive to be leaders dealing with failure and pushing for greatness. Sophomore outfielder Lukas Hinze is one of many young players noticing Pallas’ work ethic.“He has a lot of talent and he’s great to work with,” Hinze said. “He always makes sure nobody’s left behind and always helps with drills.”

With the team running like a well-oiled machine and ready for a run, their hunger, and chemistry is the driving force of the team pushing them to do better. “This could be the year for us, we are working as hard as ever, but I’m going to keep working hard and keep my ego in check,” Pallas said.