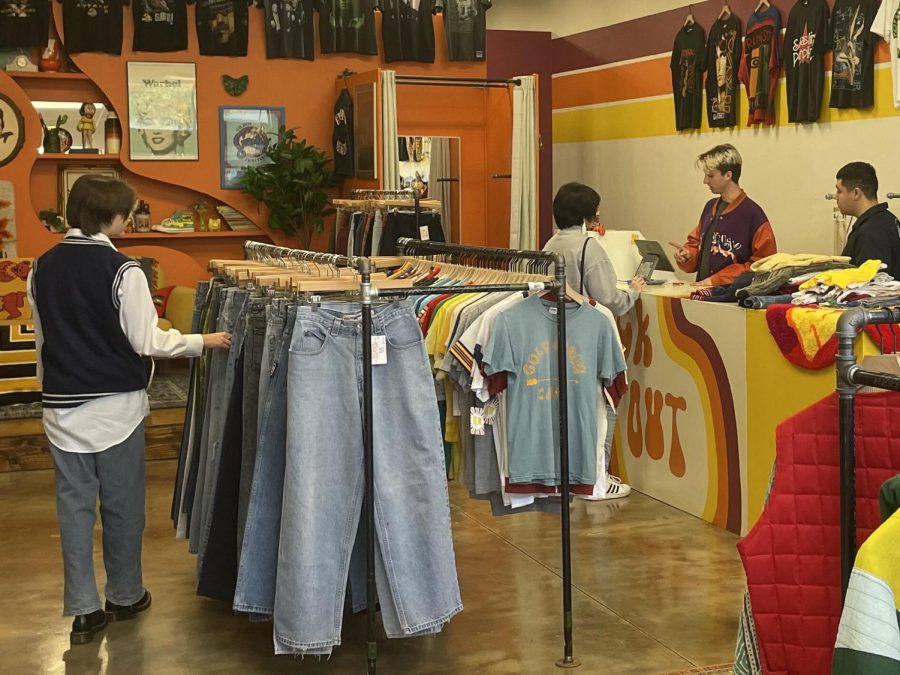 Located in a small strip mall on Williams Field and Ray, next door to Culture Clash in a small strip mall, you’ll find Perry’s new obsession: Old Habits Vintage. Amidst the recent trend of thrifting, teenagers have been venturing out to find new places with coolest, most unique finds to enhance their wardrobe.

Old Habits Vintage opened in Aug. 2021. Owner Cameron Thompson first came up with the idea two months before the store’s opening. “I was selling out of my closet for like five or six years, just to my friends. I would post to social media ‘Whoever needs clothes come through to my house.’” The hardest part about opening was taking the jump. “It’s almost like throwing a party and if no one shows up y’know… I’m here for two years and if no one shows then I’m toast. It’s been so good, I wish I had done it sooner.”

Lexi Amaro: What has surprised you the most about this experience?

Cameron Thompson: People’s attitude towards it. It’s so fun. I’ve met so many people. You gain a lot of friends. There’s always a little community about it, which I never had before . . . Everyday, someone will come in and I’ll catch up with them and see people. That’s the best part for me.

LA: What keeps you motivated?

CT: People coming in and . . . understanding how much goes into this. Parents will come in and say, ‘Oh, this is a cool little thing you’ve got going on’  and then there’s other people that understand that this isn’t just selling an old t-shirt.

LA: What do you enjoy the least?

CT: People coming in and just not understanding why a shirt is one thousand dollars and thinking that there’s only thousand dollar shirts. People will come in and point at the cool things; obviously if everybody comes in and says they like it, it’s not gonna be a cheap shirt . . . There’s affordable and then there’s just things that are expensive.”

CT: I wouldn’t say always. It started as a funny thing, like funny outfits back in high school if there were theme days. One time I came across a cool shirt and I wore it, and I realized no one else had it. It wasn’t when it was the coolest thing ever, but no one else had what you had. Versus going to Tilly’s and going to school and everybody’s wearing the same thing.

LA: Have you always been passionate about fashion?

CT: In some way I always cared about what I was wearing or kept up with what was coming out, as stupid as it is. A lot of people say, ‘Oh, I’m not materialistic.’ You are. Everybody is materialistic in a way. There’s a reason why you buy a certain pair of shoes, even if they’re not the most expensive.

LA: How do you go about the process of finding everything?

CT: First, we would just go to Goodwills and garage sales, and we would talk to people’s parents like, ‘Oh, do your parents have any clothes?’ Now we have people in a bunch of different states that have storage units. A lot of people sell clothes on their own like, ‘If you want to be added to my story, I’ll be selling clothes.’ When they don’t sell their stuff, they bring it here. Here it’s like an everyday little yard sale. Everyday it’s always different stuff. People just bring it in, and we’ll buy it from them.

LA: How was Black Friday?

CT: It was cool to see that because I was someone who stood in the lines . . . It gets busy every once in a while and there’s a lot of people who know about us, but even then I didn’t expect it to happen. We woke up late, and we opened at 11 a.m. We got here at 10:45 a.m. and we thought the line wasn’t even for the shop . . .  We probably won’t do sales that often because then people just wait for the next sale. We did Black Friday and New Years, but we’ll probably do one for back-to-school.

LA: How do you go about advertising and marketing?

CT: That’s the craziest thing. When we opened, I didn’t tell anybody . . . Three days before the shop opened, I dropped a video on my Instagram. ‘I’m opening a shop. Come and support me if you’d like.’ It blew up. It wasn’t a thing like asking people if it would be a good idea and then documenting the whole thing. It was last second; we’re opening. From then it’s just been posting on Instagram or word of mouth. My girlfriend– she’ll make TikToks and tell people.

LA: How important is the atmosphere?

CT: I think that’s 80% of it. A lot of the stores that you’ll go into, they don’t care about the presentation of it. It’s just the quality of the stuff they have. Here it’s cool because people will come in and just chill. They don’t have to buy anything. Other shops just have a bunch of t-shirts and that’s it. That was my favorite part: making it homey.

LA: How much time, per week, do you think you spend trying to find clothes?

CT: It all comes here. We haven’t had to go search for clothes since we opened.

LA: Was there anything else you wanted to add?

CT: It’s just so chill. We just hang out all day and talk to funny people, dumb people, cool people. It’s fun when people come in and they just want to know things. Some people will come over here and they’ll ask, ‘How much is that shirt?’ ‘$400’ A lot of people will try to gatekeep it, like nobody can know where you get your clothes. That’s not what it’s about, to me at least. I’m not trying to get a bunch of people in here who keep it a secret of where to find this stuff. It’s done far better than what we expected, and that’s all I ask for.

Junior Soren Snideman goes to Old Habits about twice a month, his coolest find being a pair of gray vintage L.L.Bean pants. “They’re very comfortable, and I wear them all the time. Like many others, the atmosphere of the store plays a huge part for Snideman. “They have really good music, and they’re decorated very well. They always talk to you when you come in. Great overall vibe there.”

Snideman recognizes that thrifting has become easier since their opening. “Before Old Habits, a few years ago, really the only place you could go was Wangs in Phoenix. They were the first, but it’s so far for people like us who live down here. Going to Wangs is too much of a stretch for a lot of people, and their prices are way higher than Old Habits. Old Habits is a perfect shop to open up down here.”

Snideman almost exclusively thrifts his clothing and is really passionate about fashion. “I like thrifting a lot. I’m not a very big fan of buying new clothes, just for the sake of sustainability and upcycling clothing. I used to be an avid Goodwill hunter, but you get tired of that after a while. Places like Old Habits can offer really good curation, which just makes your life a lot easier. Places have the option to mark up their prices a lot for the sake of being curated, but Old Habits is pretty fair.” Although he didn’t personally attend any of the Black Friday sales, Snideman can recall the frenzy. “Those are pretty wild. They always have a line out the door.”