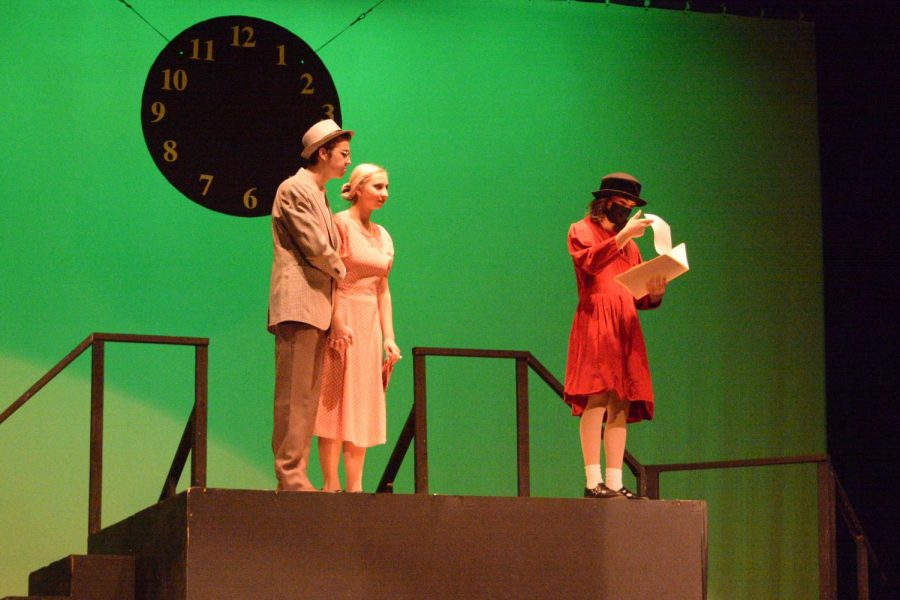 Grace Fryer (Kayla Simms) and her boyfriend Tom Kreider (Aaron Clark) discuss possible explanations for the sudden illness both girls are facing with Kathryn Shaub (Liliana Wagner). The play, Radium Girls, was based on the true story of girls who died due to radium exposure at their job.

The Perry Theatre Company performed Radium Girls by D. W. Gregory on Dec. 2nd and 3rd. The play is based on the true story of girls who worked in a clock painting factory in the mid to late 1920s. The girls’ job was to paint the clock dials with radium to make them glow in the dark; the job was extremely appealing due to seemingly good work conditions and pay (up to $20 an hour). At the time, radium was thought to be a “miracle cure” for almost every possible ailment. The girls were encouraged to lick their paint brush in order to create a fine tip. In doing so, the girls ingested copious amounts of radium.

Due to radium ingestion, the girls suffered very severe and deadly health complications. As more and more girls from the same factory started falling ill, doctors and scientists eventually drew the conclusion that radium was the cause of their health problems and subsequent death. The girls were called “Radium Girls” or “Ghost Girls” due to the way their bones would glow in the dark because of the radium. However, the company refused to take blame for the girls’ death, claiming radium was not the problem. It led to the girls suing their old company. One of the main strategies for the company was to wait for the girls to die of their radium complications.

The play starts and ends with the owner of the clock painting company, Arthur Roeder (senior Jonah Romanoff), telling his adult daughter, Harriet Roeder (sophomore Swara Kotamraju) the story of the girls he employed and his own guilt he feels for his role in the death of those girls. The rest of the play is composed of the sickness of the girls: Grace Fryer (junior Kayla Simms), Kathryn Shaub (senior Liliana Wagner), and Irene Rudolph (sophomore Bailey Hatzky), the ultimate discovery of the cause of the repeated illnesses, and the lawsuit to cover the hospital bill and ultimately the funeral bills of the sick girls.

The set was a black multi-layered platform with steps leading to and from each level. The screen in the back was a bright green to reflect the color of the radium, and above the whole scene hung a black clock with glow-in-the-dark green dial numbers. The set changed very little throughout the play; the only changes were a few scenes with furniture, which was positioned and removed by crew members.

After the play, which lasted an hour, the members of the Perry Theatre Company performed a short exhibit of their different talents that they have been working to develop. The program for the evening can be found here.