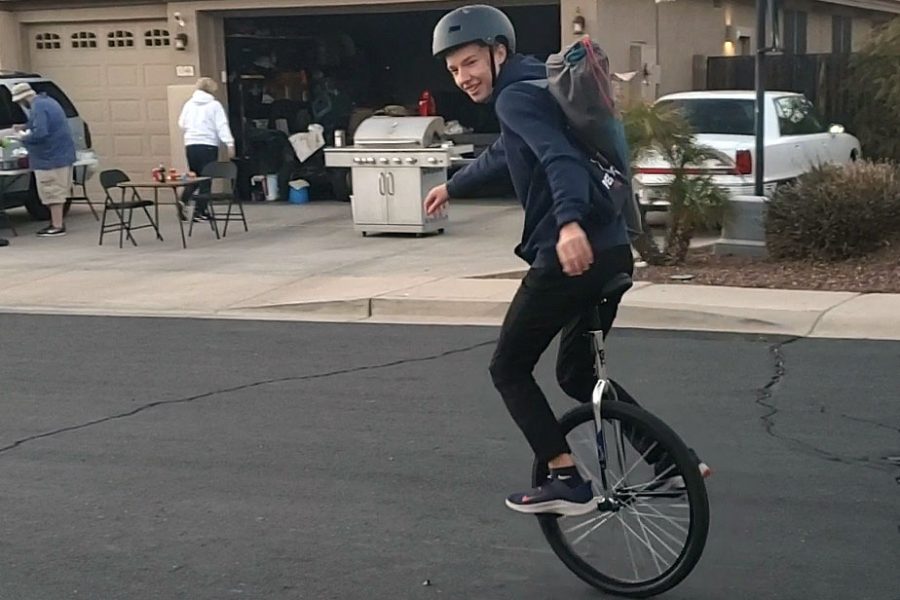 Almost a year ago exactly, Butcher began to teach himself unicycling at home.

Over quarantine, many people picked up new tricks from making banana bread to cross-stitching to even unicycling.

After seeing the performers at one of STUGO’s many pep rallies, sophomore William Butcher was inspired to try unicycling for himself.

“There were these guys doing crazy tricks and I thought it was pretty cool,” Butcher said, “I think everyone sees [unicycling] as this circus thing, but there’s actually a lot of really cool stuff you can do with it that people don’t really know about. There’s a lot more to it.”

Almost exactly a year later, Butcher decided to start Unicycle Club. “I really like unicycling and I wanted to introduce it to other people,” he said.

The goal of the club is to “mostly teach others how to unicycle, and you know, just have fun,” Butcher said. According to Activities Director Kevin Ames, “There are just certain things that the trust that insures the district would not be okay with…all of the things that are probably outside the scope of what regular schools do aren’t necessarily covered insurance wise…so the actual practice can’t be on-campus,” therefore Unicycle Club cannot meet on-campus.

Club meetings after school are intended for planning, discussing, and occasionally watching trick compilations on YouTube. At off-campus meetings, Butcher teaches club members all about unicycling and do not worry about equipment, “they can borrow someone else’s,” he said.

When advisor Taryn Johnson was asked to sponsor the club, “I laughed at first because I thought it was kind of funny but I was totally down because [Butcher] is the nicest kid,” she said, “if he wanted to start a french fry club I would’ve sponsored.” Although she has never tried unicycling before, “I really wanted to learn by the end of the year… I feel like if I can unicycle… anyone can do it.”

Even through the challenges brought by COVID-19, both Butcher and Johnson have worked hard to find new members by making bright orange flyers that adorn the school’s hallways and writing fun messages for the daily announcements. And while they understand the challenges of meeting after school (they are hoping to meet during conference next year) they encourage those interested to stop by after school even if just for a few minutes.

Butcher’s advice to anyone just starting out is, “Don’t give up…it’s extremely difficult at first and it feels like you get nowhere, but just keep going.” The Unicycle Club has meetings after school every Wednesday in room C212 and you can email [email protected] for more details.